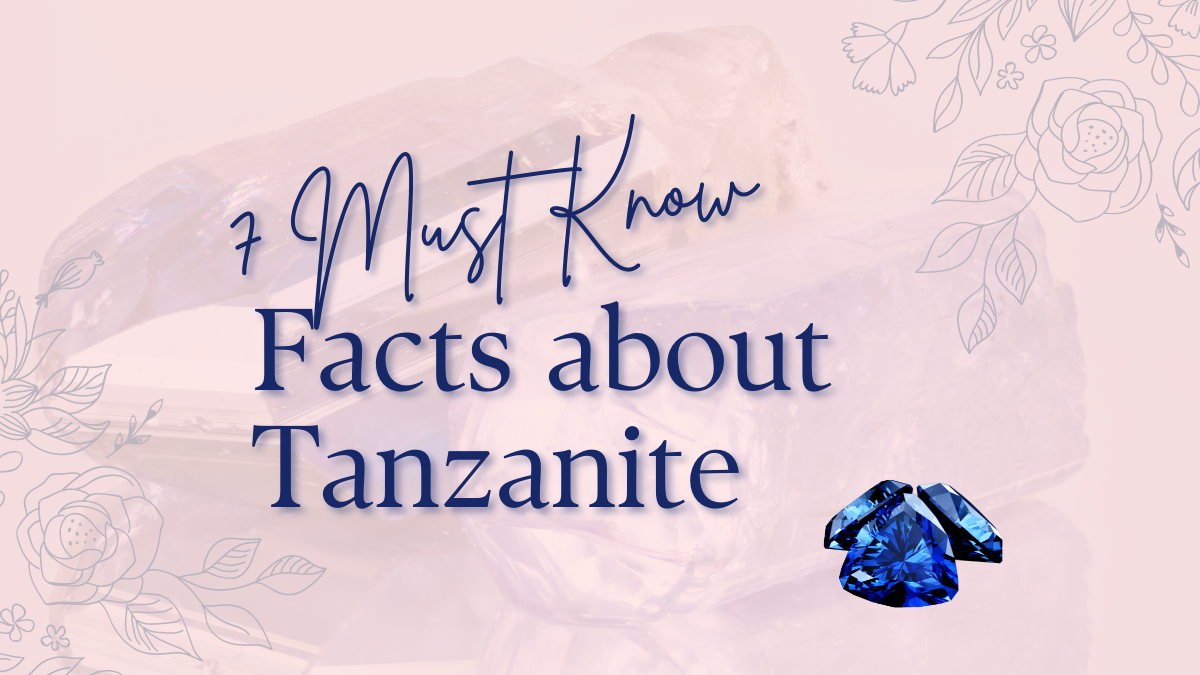 With December just around the corner, we thought it would be a good idea to share some information about the official birthstone of December, the wonderful Tanzanite gemstone.

Want to learn more about who discovered tanzanite, which region tanzanite is mined and what makes tanzanite so special? Keep on reading and learn the 7 must know facts about tanzanite…

Tanzanite is a variety of the mineral zoisite which is deep blue to violet in colour that is caused by its contents of the mineral vanadium. When found in Lower grades of the stone, the colour can become a much paler blue to violet, so the higher the colour saturation, the higher the grade/quality of the tanzanite. When most tanzanite is originally mined from the earth, it is actually a brown/red colour. It is then heat treated which turns the stone the vivid blue colour it has been so well known and loved for.

Tanzanite has a hardness of 6.5 on mohs scale which means that it can easily be scratched by harder minerals.

2. Where Is Tanzanite Mined?

Tanzanite can only be found and mined in the African country of Tanzania. More specifically it is only found in the Simanjiro District of the Manyara region of Tanzania where it is mined in a space of just 4km near the Mererani Hills just south of Mount Kilimanjaro. This mine is regulated by the Tanzanian Government and is split into 4 blocks named blocks A, B, C & D. Blocks A & C are used by commercial miners while blocks B & D are reserved for locals.

This is the only place on earth where tanzanite can be found and the chances of finding tanzanite in any other location are said to be over one in a million! This is because tanzanite is what experts describe as a geological phenomenon which was said to have happened 585 million years ago due the shift in tectonic plates, coupled with significant heat that formed Mount Kilimanjaro, also formed rough tanzanite in the process.

Tanzanite was first discovered in 1967, however there’s quite a bit of controversy surrounding the discovery of tanzanite. One person who is credited with discovering tanzanite gemstones was a man from a local masai tribe named Ali Juuyawatu who was said to have discovered vibrant blue gemstones on the floor after a lightning strike caused a large bush fire.

However the most popular theory of the discovery of tanzanite is by a man named Manuel De Souza who was from Goa in India. It is said that Manuel De Souza, who was a keen prospector, was in the small town of Arusha near Mount Kilimanjaro where he discovered what he originally believed to be sapphires while gem hunting. After realising that the gemstone was too soft to be sapphire, the gem was later classified as a form of the mineral zoisite and given the name “blue zoisite”.

4. Where Did Tanzanite Get Its Name

As mentioned earlier, tanzanite was originally named as blue zoisite. Back in 1968, Tiffany & Co’ caught wind of this radiant blue new gemstone but thought that name sounded too much like “blue suicide”. So they named the gemstone Tanzanite in tribute to the county that it originated from. They then created a marketing campaign of Tanzanite can only be found in 2 places, in Tanzania and at Tiffany’s.

Tanzanite is one of rarest natural minerals on earth. This is largely due to the fact that it is only found and mined in one small 4km strip of land in the entire world. It is actually said that tanzanite is in fact, 1000 times rarer than natural diamonds.

To put into perspective how rare tanzanite actually is, some geologists have estimated that the supply of tanzanite could be depleted within the next decade or two which would render tanzanite as an heirloom.

6. Why Does Tanzanite Change Colour?

7. Why Is Tanzanite The December Birthstone?

The month of December actually has 3 different associated Birthstones. These are zircon, turquoise and of course, tanzanite. It wasn’t until 2002 that tanzanite was officially recognised as the birthstone of December by the American Gem Trade Association. It was the first birthstone that was added to the official list of Birthstones since 90 years prior, all the way back in 1912!

Thank you for taking the time out of your day to read our blog. Now you know why tanzanite is so special and very deserving of being such a treasured gemstone in jewellery! What do you think about tanzanite? Is it one of your favourite gemstones or not? I know it’s one of mine! Let us know what you think in the comments below!

Sign up to our mailing list and be the first to know when we release new content like the article you have just read. You will also be rewarded with a 20% discount code which you can use on your next order with us!

Due to the current Royal Mail strikes, there might be a slight delay in your delivery. We now also offer the option of UPS Tracked (2-3 working days) from £3.85. Dismiss